What is Medical Qigong?

Medical qigong is a modality of traditional Chinese medicine which affects and directs the qi for therapeutic benefit. Acupuncture needles, herbs and tuina bodywork also affect the qi therapeutically, but medical qigong is distinct in that it relies on the ability to direct qi with one’s mind, breath, hands (for practitioner administered medical qigong), and posture/movement for self-care medical qigong.

Qigong (pronounced chee-gong) is defined by the National Qigong Association as “an ancient Chinese healthcare system that integrates physical postures, breathing techniques, and focused attention.” The earliest history of qigong is lost in antiquity, but some say it goes back to at least 4000 BC. People practice qigong in order to preserve their health and also to heal their body should disharmonies arise. Qigong is also used to calm the mind and to help one reconnect with one’s spirit. Like all of Chinese medicine, a basic premise of qigong is that of holism. In other words, we cannot treat the body without affecting the mind/emotions, and vice versa. Any of us who have had chronic pain know the truth of this when we experience how any increase in stress also makes our pain worse.

Qigong differs from yoga, another excellent ancient system for promoting body-mind-spirit well-being and harmony, in a number of subtle ways. Many people have found that the practice of both qigong and yoga can be mutually enhancing. Medical qigong usually includes some posture/movement, but this is not a requirement. Medical qigong can be performed standing, sitting, or even lying down. Breathing and intention are the essentials for medical qigong practice, with physical posture and gentle movement serving as enhancements and ancillaries which will facilitate the process. Everyone can benefit from medical qigong practice, regardless of their physical abilities, age, belief system, or life circumstances. 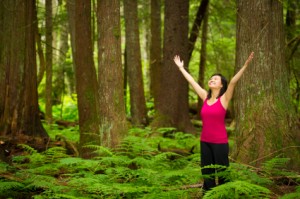 There are three main types of qigong: martial arts qigong, medical qigong, and spiritual qigong. All three types share some basic premises but differ in their objectives. In martial arts qigong, the emphasis is on the cultivation of strength and power. Tai ji quan (also known as Tai Chi) is a martial arts form of qigong. In general, this type of qigong tends to be more active and to place much stronger emphasis on precision of form (posture and movements). Medical qigong is practiced for health benefits, both maintenance and promotion of well-being, and correction of imbalances. Medical qigong can be practitioner-administered; individuals can also be given a “prescription” from a medical qigong doctor for particular exercises to help correct their particular issues. Spiritual qigong is a way of cultivating bodymind awareness to help deepen one’s spiritual life. Traditionally in Asia, this has usually meant enhancing Buddhist or Daoist practice. Now with the growth of qigong practice in the West, and the growth of Western religions in Asia, one can find more and more the use of qigong to deepen spirituality in Christianity and Judaism. Qigong in itself requires no adherence to any particular religious belief system. The decades of state-supported qigong practice in the People’s Republic of China attest to this fact. 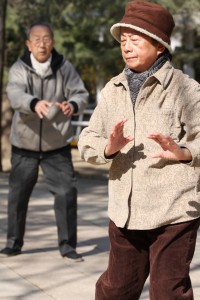 Qigong involves quieting the mind so that one can learn to perceive the flow of energy within one’s own body. This is done by a combination of breathing and focused concentration on aspects of the body and energy system. Sometimes you are asked to visualize particular energy movements, as a way to begin to develop your perceptions.

Medical qigong is the oldest therapeutic modality in traditional Chinese medicine, which includes herbal formulas, acupuncture, a form of bodywork called tuina, along with other modalities. Medical qigong can be considered acupuncture without needles because both involve manipulation of the energy system in order to restore balance and harmony. Medical qigong, however, is more like the use of herbal formulas in that both involve a more complex and refined set of diagnostics and treatment methods than does acupuncture.

What is Medical Qigong? was last modified: August 29th, 2012 by cheryl